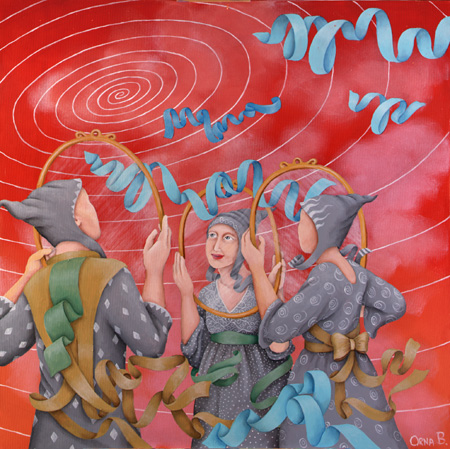 Study of a Blue Curl
80x80 cm - 6/2012
Does the scientist influence the object of study?
A group of researchers is focused on the patterns of movement of blue spirals.
Their intense thoughts have great power that generates a field of action that drives the spirals in various directions and speeds.
The roles change, and the blue spirals are moving according to the thought patterns of the scientists. The research topic – the spirals – is turning into detectors that now follow the movement patterns created by the minds of the scientists.
An endless game of observation and reaction takes place in the laboratory of the red sky.

Team in Transit
90x90 cm - 8/2012
A group of souls travel in infinite space. The figures clasped together with love, support and mutual devotion.
We incarnate into the world as individuals in groups of souls that share a karmic connections.
When we reach the physical dimension, we join with our team members who play important roles in our physical lives. We share pre-written contracts, intended to bring about interactions, circumstances and events that support our spiritual journey.
Even if we quarrel with a kindred soul in our earthly life and feel rejection and hostility, even if this kindred soul will challenge us throughout the years, when we return to the spiritual dimension - all resentment and rivalry would disappear.
In eternal reality, where the body and the ego are non-existent, we understand that the “antagonist” soul merely played its role in our lives faithfully and successfully.
Something to think about, especially when we feel that a certain person in our lives annoys us consistently and push our sensitive "buttons" ... 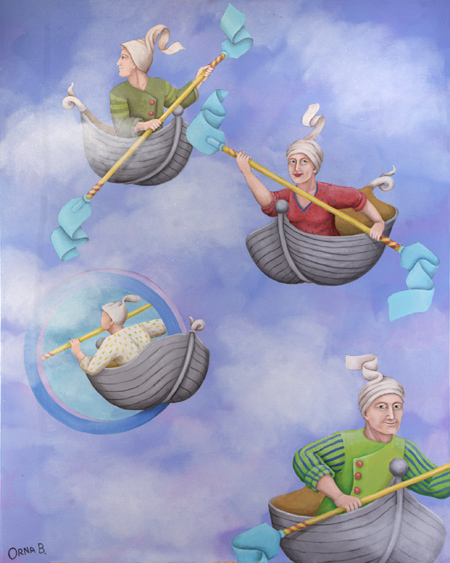 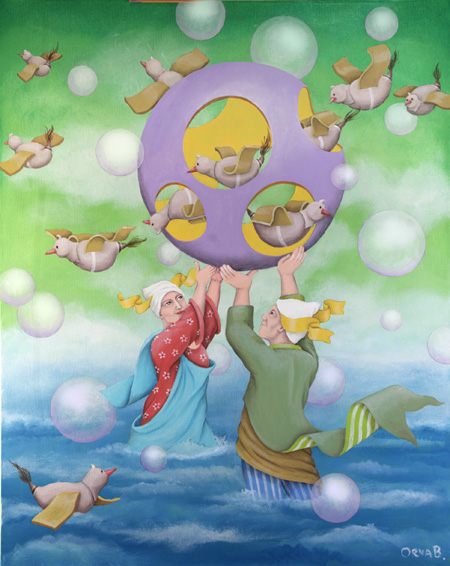 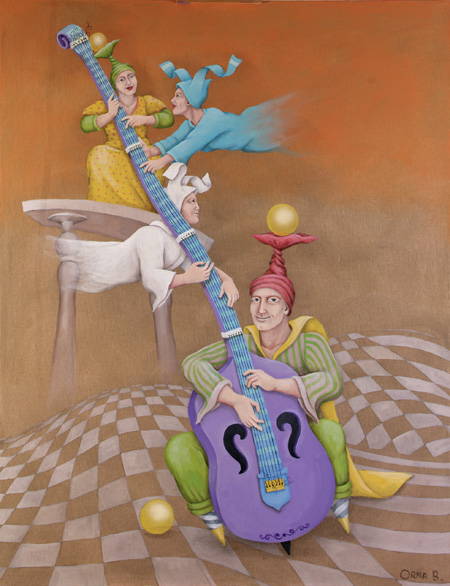 Symphony by Four Players
70x90 cm - 4/2013
"Do you know that our soul is composed of harmony?”
[Leonardo Da Vinci]
When we focus on doing the things that delight our being and fill us with renewed energy, we have hidden partners. Muses fill the spaces that remain open and help us produce true masterpiece 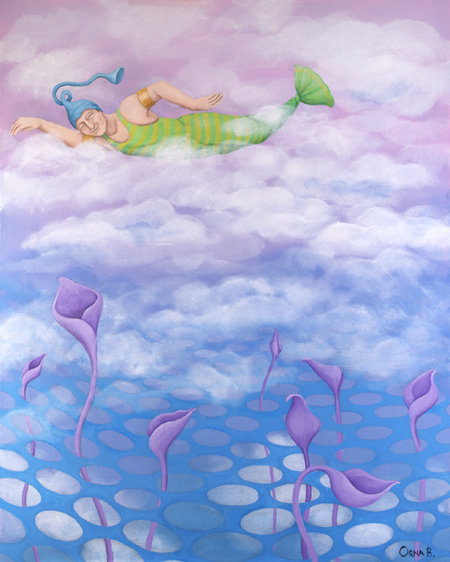 The Eternal Swimmer
80x100 cm - 6/2013
My dear father had left his body, descended from his weak and ill shell and travelled to unknown, faraway regions.
I stayed optimistic, knowing that in a short while, I will be able to get in touch with him, and share his joy in the new realm, where he is not bound into a physical body.
A few weeks later, he visited my awareness and allowed me to see how he spends his time in his new place: He is now light as a feather, swimming in infinite space on the backs of clouds.
I think he is finally happy after many years of being on earth, an innocent being leading a life of battles and challenges. The smile I saw on his face reaffirms that. 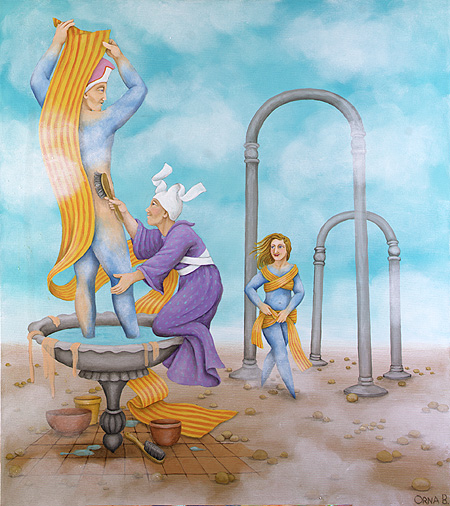 Back To Spirit
90x80 cm - 2012
When we return to the spiritual dimension, we happily shed the shell that carried us in our visit to the material world. This is the physical body, which served us as a disposable container and was sewn for us for a single stay in this world. When we get back home, we enter the heavenly bathhouse, and light entities purify us from scraps of matter that were stuck to us. The remains of the physical body are washed away, the ego, and other layers that connected us to the material world.
Pure and spotless, light like a feather, we continue our spiritual journey on the other side. 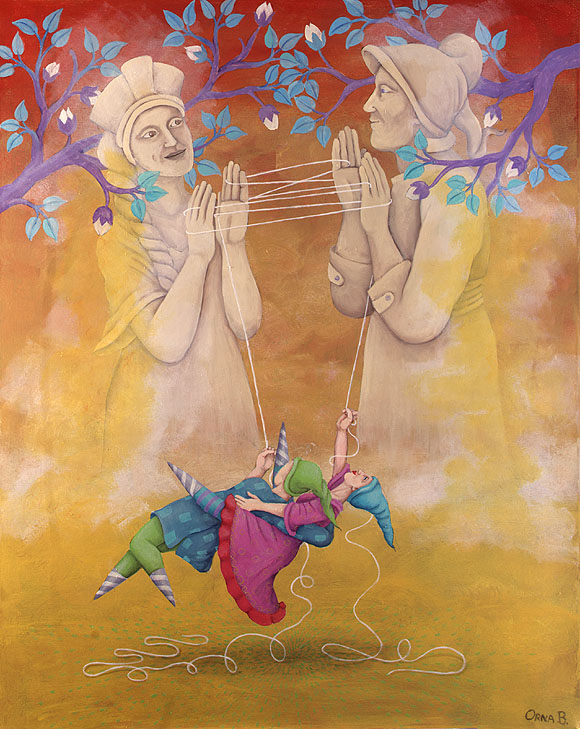 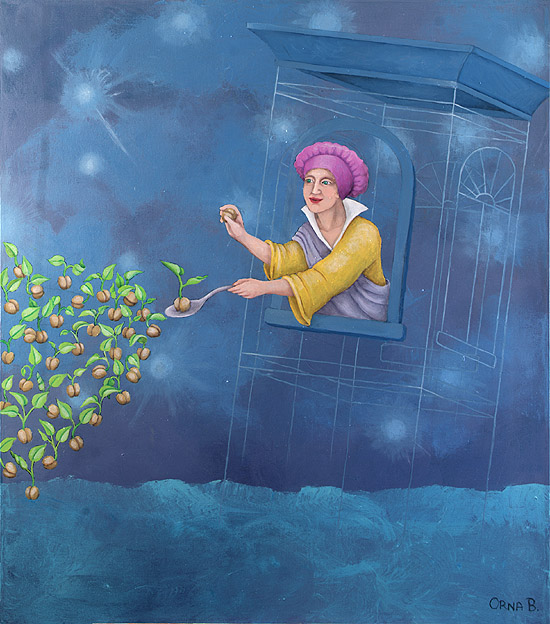 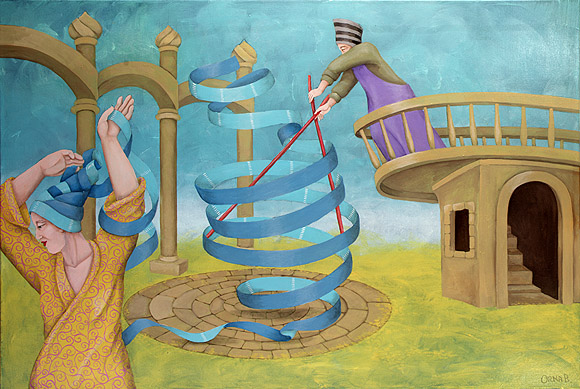 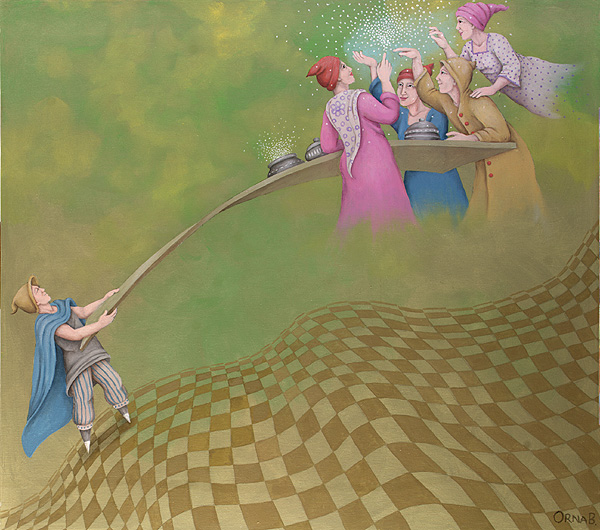