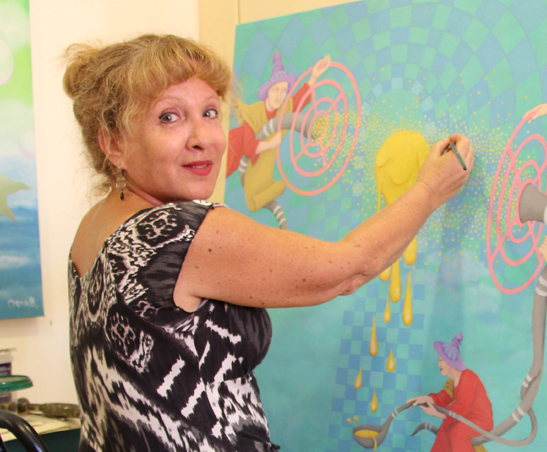 Alternative Realities lie parallel to the world we are familiar with...

Orna Ben-Shoshan's artwork gives the viewer a rare and insightful visit to places beyond consciousness. Her paintings release the imagination and extend the limits of ordinary perception. In her colorful scenes, which take place in a distant world, creatures and objects interact in unpredictable ways and are uninfluenced by the laws of physics.

Artist Orna Ben-shoshan receives the images she paints through channeling. Unlike most artists, all of her paintings are completed in her mind before she transfers them onto the canvas. Orna's works infuse deep spiritual experience with subtle humor.

Critics remark that each of her pieces is a world unto itself. The images are executed with intricate detail and seasoned by a multitude of colors and decorative patterns that are influenced by her work as a designer.
During her career as a fine artist for the past twenty years, Orna has created a large body of work and is presently focusing on oil paintings. In addition to oil paintings, she creates computer art. These images are transformed into hand-decorated prints on canvas. Currently she also works as a freelance illustrator and textile designer.
Orna Ben-Shoshan was born in Kibbutz Yifaat, Israel, in 1956. She received her training as a graphic designer in Tel-Aviv. In 1982 she moved to the U.S. where she lived for fifteen years.
Since her first one person show in 1983 (Lancaster, PA) Orna has exhibited her work in museums and galleries throughout the U.S. and abroad, including "ART EXPO N.Y." in 1996. She has received several awards, such as the "Grumbacher Award" from the Copley Society of Boston. Her work was published in "Yoga Journal" and by "Recycled Paper Products". She is also featured in the 10th edition of "The Encyclopedia of Living Artists".
Orna returned to Israel in 1996 where she is continuing to work from her studio in Ra'anana. Her first one person show in Israel took place at "Tzavta", Tel-Aviv, in 1998 and won remarkable reviews. Since then, she has been exhibiting her art at numerous one-person and group shows in Israel and Europe.

View her artwork and become enchanted by an astounding world, where anything is possible. Snatch this opportunity to enrich your imagination, expand your horizons and become familiar with a rapidly rising and talented artist. You will be captivated, exited, enthralled and inspired...

Hello Orna
I was seeking soul nourishing experiences in cyberspace when i was
blessed to find myself at the doorway of personal expression that is
your online home. I celebrate the beauty of who you are. You are a
person whose life and work touch people in ways profound and
positive. You have my admiration and respect. I found everything
enriching and enchanting. Thank you for sharing who you are as
doing so benefits all humanity. I wish you a sanctuary of peace and
joy where all your dreams become realities.
Mayyou love and accept yourself as you share your unique gifts and May you awaken your soul as you accelerate your spiritual evolution.
Yours in Guidance from the Universe -Micheal Teal The Ancient One http://www.writerscafe.org/oldman